SHANGHAI, Nov. 27, 2017 /PRNewswire/ — The 6MWp solar power plant in Namibia, built by the PowerChina Guizhou Engineering Company, was successfully constructed and is expected to be commissioned and grid connected by the end of this year. It was the first time that Arctech Solar supplied Arctracker Pro, with the world’s first invented redundancy design, to an African project, which marked the successful entry of Arctracker Pro into African PV market. 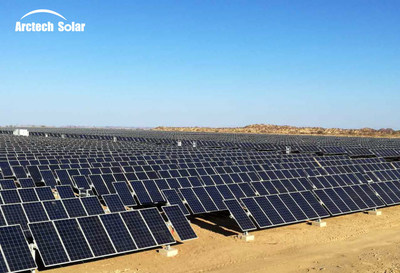 The Republic of Namibia is facing an acute deficit of electric power. More than half of the nations electricity is imported. The local power company aims to achieve self-sufficiency in electricity by vigorously developing renewable energy. On the basis of the actual field landform and topography, Arctracker Pro was special designed and applied to this project, with its reliability of redundancy design and rotating ranging from -45 to 45 degrees, Arctech is expecting a significant project energy yield increase from this project. It is also the first solar tracker project in southern Namibia so far.

The president of Arctech Solar’s international business, Mr. Guy Rong said that with the implementation of the Belt and Road initiative, Arctech Solar is responsive to the beneficiary policy, and actively implemented the ‘going global’ strategy by assisting to promote the development of African Solar PV industry. Further to this, Mr. Guy Rong indicated: “This project in Namibia could be a good start for us to build a strong relationship with local partners in the solar PV industry. We expect the win-win cooperation with both foreign-funded enterprises and Chinese enterprises in Africa, and we hope our solar tracking and racking systems could bring extraordinary effects to the countries and regions, that are along the route of the Belt and Road. More importantly, we could help local power company to develop and make most use of solar energy.”

Arctech Solar, as one of the world’s leading manufacturers and solution providers for solar tracking and racking systems, will continually offer more efficient and economic products and solutions to our customers worldwide.

Arctech Solar is one of the world’s leading manufacturers and solution providers of solar tracking and racking systems. Through 8 years of development, Arctech Solar has set up manufacturing bases in Kunshan and Changzhou in China and has also set up subsidiaries and service centers in many regional markets such as America, Japan, India and Europe. As of January 2017, Arctech Solar has cumulatively installed 10GW and completed almost 600 projects in more than 10 countries. With a production capacity of 6GW and 3GW in fixed mounting structure and tracker fields respectively (a total annual capacity of 9GW), Arctech Solar has grown into a reliable partner in the Global PV Tracking and Racking market.